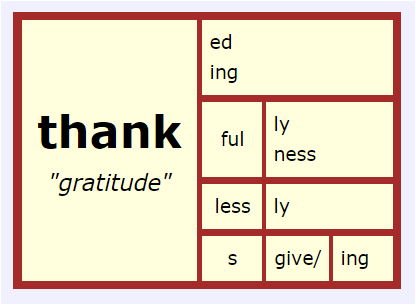 Me:  “So, what word do you think we should use this week to make word sums with?”

Students:  ” Um….let’s see…..how about ‘turkey’!  or ‘stuffing’!  Wait, we should probably study ‘Thanksgiving’ since it is happening this week!”

Student 1:  “Or, we should study just ‘thanks‘ because we can make a lot of words with that.”

Student 2:  “We could study ‘giving‘ because we could make ‘give, gives and giving‘ with it.”

Me:  “Great ideas!  Since we can make many word sums with ‘thank‘ , let’s try that one, then we will try to make a matrix!” 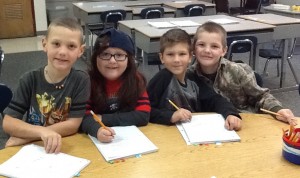 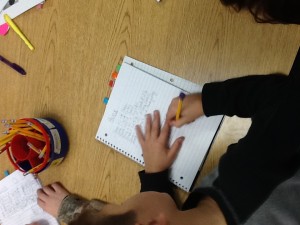 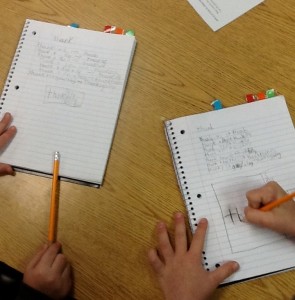 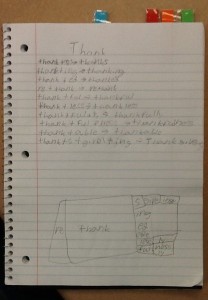 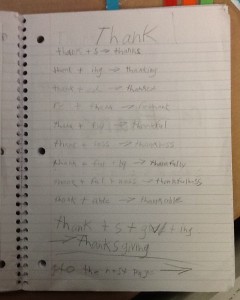 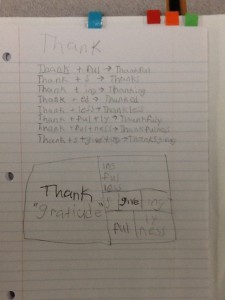 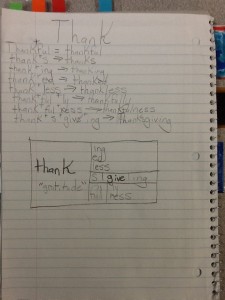 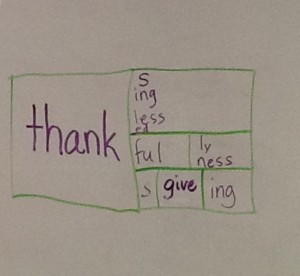 Tuesday we will journal about things we are thankful for!  At the top of my list—  finding the SWI Community to learn from!

I started this blogpost well over a month ago but time ran away from me and I’m just getting back to finishing it.  However— time is not on my side any more today than it was a month ago, so it’s going to be short and sweet!

My 5th grade group studied the word <dyslexia> and took some action to raise awareness of this common learning disability during the month of October.  Along the way, we learned a lot more than just what Dyslexia means. 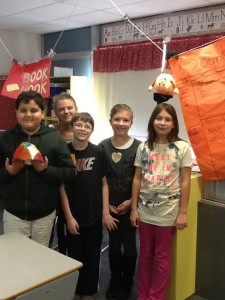 In the pictures below, you can see we found 2 Bound Base Words from this single word and a suffix:

From there, we learned how to use dictionaries, Etymonline, the Word Searcher and Mini-Matrix Maker to find definitions, word origins, other related words and a grid forming program to make neatly typed versions of our posters.  We hung the posters in the hallway for the school to view.

Some of the best “take-aways” from this work was learning how to search our minds for relationships between words when using the Word Searcher.  The list of words that have <dys> or <lex> in them was lengthy–we had to ween the list down by finding words that held the same/similar meanings and ignoring the rest.  For example:  the words <duplex> and <flexible> came up in our search but they do not have anything to do with the bound base of <lex> which has to do with words, so we chopped our study list to about 1/8 its original size (oh yeah…..we used this to show fractions too!).

Here are the posters this group made: 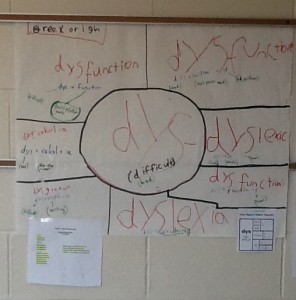 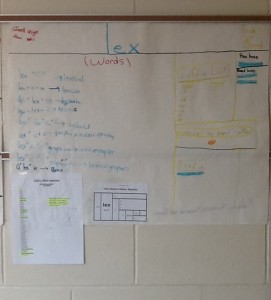 Some mornings start out a bit slower than others –maybe its cloudy or windy and rainy or just that I haven’t pulled the shades up yet to let the sun begin to warm the day.  Sometimes, we don’t need the physcial sunshine to warm our souls–it is often caused by student action.  Last week a moment such as this occured, William entered my classroom with a face lit up with pride.  He was dressed in his military outfit, brandishing dog tags and a new book called, Military Animals, that he’d picked up at the Book Fair the night before while he and his family attended Parent – Teacher Conferences. 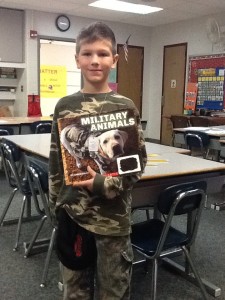 This was one of those rare days when the other members of our group were either absent or had a special activity in their GE classroom, leaving William and I to alter the lesson plans to fit a one-to-one session.  We took full advantage and took a Book Walk through this wonderful informational book on all types of military animals–including insects!  As we read, we determined a common theme among the heros of war times and took a closer look at several of the words that highlighted the theme. 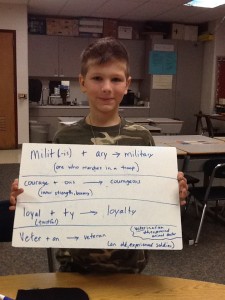 We searched these words on etymonline.com to seek their origins and history.  We looked them up in dictionaries and between the sources evaulated which words described them best and with consistency.  Here is what we learned:

(one who marches in a troop)

My personal favorite for the day was <veteran> because I struggle with spelling this word correctly–I often misspell it as <vetran> most likely because of its pronunciation /vetran/ and that I’d never connected the base of <veter> with other words.  In looking this word up, we found a connection to the word <veterinarian>.

(from veteris “old” –old, aged, that has been in long use)

William and I had just enough time to discuss the suffixing rule of how a <y> can change to an <i> when adding a vowel suffix before it was time for him to go back to class.  The really amazing thing about this day was not only seeing a student proudly supporting the Veterans of this country, but also his enjoyment of connecting words and meanings.  He loves finding links to words and asks about them often.

I do believe a light has been ignited in this brilliant young mind!