Wednesday, January 20, 2021 marks another turn of presidents in the United States of America. This post is a near carbon copy of the post I did back in 2017 for that year’s inauguration. The PDF of the Slideshow lesson has been updated to reflect the incoming inauguration ceremony of Joe Biden with Kamala Harris as Vice-President. There is no political information on these slides, they aim to bring clarity to the word “inauguration”, to help us understand why this word is used for this ceremony.

January 20, 2021 is an historic day in America, we inaugurate our new President, Joe Biden.  While  attempting to give my students a deeper understanding of this ceremony, it led to some interesting investigations. 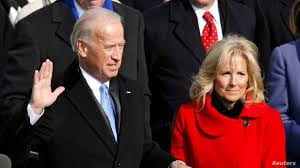 A swearing in of Joe Biden (unknown ceremony/year). Source: Deseret.com

This is a slideshow I created with my students as we analyzed the word “inauguration” and investigated the trails it led us on. These investigations helped us understand the etymology (historical origin) and the structure of this word along with the many others it is related to….

“You buy one base and you get plenty more for free!”

(said by an SWI friend–Ann Whiting, it’s a great motto).

Historically, I’m certain some people were better at noticing things in nature and predicting when it may be a good time to plant crops or increase the harvest before an early winter set in.  People with that sense and skill were regarded highly because of their ability to make nature-inspired good predictions that may bring good things to a village. Ceremonies, inaugurations were held for all to come and listen to these prophesies that were based on good omens, the augur noticed.

So, how is the modern-day use of this term relevant to its historical use?  The bound base <augur> retains its denotation of “predict, foretell, seer” with the idea of bringing an “increase” or goodness of some sort (denotation of <aug>).

When a new president is sworn into office, he takes an oath,

he makes a promise of goodness and truth

to the American people during an inaugural ceremony.

How is <aug> a bit different? It was difficult to determine if these shared a historical root based on the etymology which used words such as perhaps, presumably originally, probably, when describing the history.

I can find 2 Latin roots associated with these 2 bound bases:

Latin had suffixes that were removed when these came into English (-are, -ere) which leave us with bound bases of <aug> and <augur>.

in order to surface as a word in English.

<aug> is in words such as augment, augmentation, and August (I’ll let you discover the story behind that one–click here)!  An augmentation device is one that increases one’s ability to do something. We can synthesize words with this bound base such as:

The Latin root augere, is even related to words such as auxiliary (increased support); auction (a sale of increased bids) and author (go look this one up, here)!!  Such intriguing quests….the best quests are those that you go on to seek answers but end up with more questions!

View the slide show (above) to see both lexical word matrices, word sums, as well as what it is NOT!  All because we wanted to learn more about the historic event that happened this afternoon in our nation’s Capitol!