Nearly 365 days ago I did a thing that I forgot about. I made a video of a word study that my students and I had begun investigating at the beginning of March 2020.  The pandemic had just shown it’s ugly face and lives all around the world were turned upside-down. At the time, we had just been sent home to try to figure out quarantining while teaching from home. We worried about the health of our children, our families, our students, friends, neighbors, even strangers. We had no idea how long the shut-down would last. We hoped it might only be a few weeks or months at the most– it was unfathomable. Nearly 1 year later, so much in our world has changed and yet we all try to do as many familiar things as we can to bring back a sense of what used to be, our norm. Our school just kicked off March Is Reading Month and soon it will be St. Patrick’s Day.

As I began thinking ahead to St. Patrick’s Day, I kept feeling like I’d forgotten something. I checked for my keys and wallet multiple times over the past few days. Finally, at the end of the school day today, it hit me — I had made a St. Paddy’s Day word investigation video last year!! I quickly searched my blog, but did not find it. I searched both of my YouTube channels, but did not find it. I searched my laptop and school computer hoping to find the video — no luck. Then dread set in as I recalled that the piece-meal computer system I had been using at home last year, which had suddenly been thrown into being overworked, died after a few weeks of teaching from home. Oh no! I sure hoped it wasn’t on ‘Ole Bessy, her memory left before she even knew it was gone. I vaguely recall several people commenting about how much they liked the video, that it had clearly demonstrated all four of the Essential Questions of SWI, so I must’ve posted it in my Facebook Group for Structured Word Inquiry at some point…..but where was the actual video file??

Finally, I remembered to check my Zoom account recordings!!   Oh, thank goodness! While organization has never been my strong suit, especially abstract computer files– this past year has been challenging to say the least– finding time to create lessons for a virtual setting took all the available time I had. Besides, I totally own my disorganized filing systems– it just isn’t in my wheel-house. I secretly feel giddy & satisfied when someone shares the meme that a messy desk is the sign of a genius (and stick my nose up at the meme that says an organized person is a sign of a genius –wink, wink!). I digress. At last, I have found it and done so in time for this year’s St. Patrick’s Day studies — I feel so relieved! 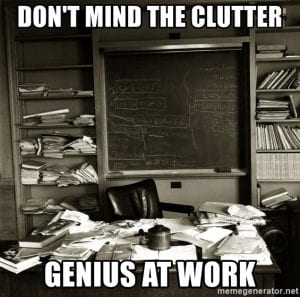 This video lesson takes you through an investigation started last March by one of my students who quietly wondered aloud if shamrocks shared any relationship to real rocks.  Students in my classes are not shy about asking questions about potential relationships because they know we can find the answer and that they will learn something even if their thought or question ends up inaccurate. I’m amazed at the questions they ask or the mutterings they verbalize even when they don’t realize they’ve asked them aloud! I often wonder how much confusion my previous students kept hidden in their too-afraid-to-ask minds before I taught SWI, that saddens me a bit.

I much prefer to relish in the joy of kids sharing what makes them curious.

My favorite mentor has a saying we have posted in our classroom, “Scholars are people who notice things” (and thanks to my friend, Mary Beth, we have an actual poster of that instead of having it scrawled in my handwriting on a piece of butcher paper!). 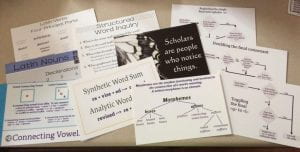 What happens when kids share their curiosity or their hypothesis about a word? First, let me tell you what does not happen; students do not hear, “Rocks, why would you think rocks is related to shamrocks?” nor “What? No! We don’t have time for that nonsense.”  OH NO, SIR!!

“hmmmm… I’m not sure, what makes you wonder about this?” and

Sometimes, we don’t get to the other lesson I had planned (but don’t tell my boss!); sometimes, the word is put on a Wonder Wall of Words We Are Curious About; sometimes, students investigate these on their own; sometimes they don’t; sometimes I squeeze out a few extra minutes to lead an investigation. In any case, they learn an awful lot about the sense & meaning and the structures of the language they speak, hear, read and write every day. They apply that knowledge to read with higher accuracy, at faster rates and most importantly, with higher comprehension. They write and spell with more accuracy and fluency. Even more than that, they remain curious and learn to think critically, knowing they need to find evidence to back up their hypothesis about a word sum or a related word.  This takes time. How much time? It takes the time it takes. Nothing is lost, only gains are made. They may momentarily depart from the lesson-at-hand but they will learn far more than the lesson-at-hand. 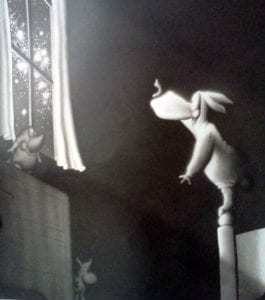 “They may get carried away and depart the text.” From Goodnight Opus, by Berkeley Breathed

The result is often one, two, three or more additional rabbit-holes/branches/paths/meanderings/jaunts/you-name-its……and it’s wonderful, scholarly and addicting!

I hope you enjoy learning about the history and relationships of the word shamrock and the many other words we encounter in this video. There are 2 parts — after minute 15 or so the initial work with shamrock is finished. But why stop there? There is a second part that may surprise you even more. Happy March Is Reading Month and Happy St. Patrick’s Day 2021!