“Words are just words aren’t they?” was the question one young person asked during a recent lesson about Parts of Speech.

Words can appear to be basic commodities when in fact they are much more than basic — they, along with punctuation, give our writing definition, character, style and most importantly, sense and meaning. If we use them properly, then what we write will convey a message, story, directions, feelings, and much more.

How do words become more valuable to students? By helping them form a deeper understanding of them and their grammatical functions. So, we study words and we study the structure of sentences.

We began our grammar unit learning about nouns. We found that the word ‘noun’ has an orthographic denotation of “name”…. I hear you, you want to know what an orthographic denotation means – brilliant — you see, words have a history. Some words go back thousands of years, others only a few years (think about the word ‘googled’ as in I googled the store hours.). How did a word come into our language? Why did it? What was its original meaning(-s)? Orthography is the spelling of a word and the denotation is the original meaning of that word.  When we want to understand the spelling of a word we often look up its history (etymology “true sense”) which helps us understand the spelling, sense and meaning of a modern-day English word (abbreviated as MDE).  In orthographic linguistics, we use the quotation marks to highlight the denotation of a word. We also use angle brackets <  > to show a spelling and it is intended that when you see letters inside the angle brackets, you spell those out rather than read it as a word.  If you see a word in single quote marks ‘   ‘  you read that word — all this technical, but very important information will help you read through this blog, plus, it will help you be a spelling scientist, too!

Let’s look at the word ‘orthography’:

<o> is a connecting vowel letter

Wait, isn’t the title of this post about PRONOUNS?!?! How did we stray so far? It’s easy when you are a scientist! You know how people often comment about an ‘absent-minded professor’? That professor isn’t likely distracted by random things, he/she is often so attracted to things that make him/her think about something in a new way that they work to understand that new perspective. When we talk about spelling with a new perspective, we also have to take time to explain some of the newness so everyone can understand and behave like spelling scientists.

Back to grammar – While studying nouns, we realized that in Latin, the denotation was “name”, so, nouns name things—people, places, things, feelings, & ideas. We learned that Proper Nouns give a name to the named thing. We learned about concrete, abstract, singular, plural, non-count and possessive nouns.  We also learned that pronouns take the place of nouns and that the denotation of ‘pronoun’ is:

One of the things young writers often do is begin their writing pieces with a pronoun, forgetting to use the noun — is essence, they are writing something that has the function of replacing a noun without letting the pronoun do its job! 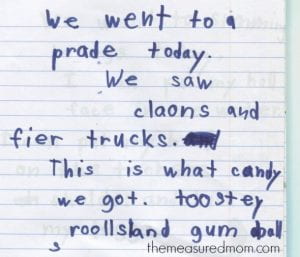 By investigating the denotations of noun and pronoun, we were able to associate the function of a pronoun with taking the place of a noun. We practiced making statements that began with a pronoun, such as, “He bit me on the leg.” and asking the students to form a mental image of that statement. Each person shared their image of who/what they thought “He” represented. A few students thought it was a little boy, while several thought it was a dog. I looked shocked and said, “What?!? My story isn’t about a boy or a dog, it was about a hamster!” To which they replied in shock as well.  A few even commented that I should’ve said it was a hamster first if I wanted them to know that, after all, they can’t read my mind … which was exactly the point of the lesson, brilliant young minds these kids have isn’t it?!?

Next, we learned 6 types of pronouns and 3 Points of View (POV). Students often tell stories from the 1st person POV, once they move beyond stories of self, they often use third person. We explored that for a bit and what I found interesting is that the kids began to notice that they already know quite a bit about the function of pronouns because they use it in their every day speech. They began to recognize they weren’t learning something foreign but instead, something quite familiar. They were just learning how to see that what they generally write often lacks the same clarity as when they speak. Additionally, that during a conversation, their partner has a chance to ask clarifying questions but that a written piece needs to be more cognizant of creating clarity in advance. Wow…that is quite a feat for young people! 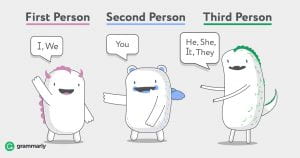 One way we can help them create clear written pieces, is to help them unpack the structure of a sentence. We begin with learning the Parts of Speech. This can feel like a slow process but it is critical. While the students don’t need to memorize everything, they do need to be able to identify the functions of each within sentences. When they understand the structure of sentences, they can expand simple sentences into compound or complex sentences more easily.

Grammar is complex. Grammar is not entirely agreed upon, even in the scholarly world of grammarians (see Lecture 6: The Parts of Speech Problem). It is interesting and informative when one has an understanding of it. Admittedly, this is not an area I am super comfortable with in my own knowledge.  I’ve been slowly adding more and more understanding of my own over the years — it is slow going because I’m afraid of grammar. There, I said it. For as long as I can remember, I’ve been baffled by the language I speak and read aloud so well since comprehending it has always been elusive and downright challenging at times. But, the more I understand about the structure of words and the structure of sentences, the easier comprehension materializes. I wish I could just jump in, head first, but although I’ve been dipping my toes in, I’ve been quickly pulling them out from the frigidness of the grammarly waters. I’ve partially read multiple books on writing and grammar such as This Language, a River: A History of English; A Short Course in Grammar; Hands On English Linking Blocks Prescriptions for Good Grammar; The Sense of Style: the Thinking Person’s Guide to Writing in the 21st Century and The Writing Revolution. I’ve also taken a class by Mary Beth Steven, Getting a Grip on Grammar and purchased her student and teacher books, The Grammar Examiner. Mary Beth’s class is based off of the work of Michael Clay Thompson and is by far, the piece that has made my understanding accessible so I can teach it to my students. My mission in dipping my feet into the pool of grammar is to make written language something my students are not afraid of, to make it something they revel in and eventually command.

Mary Beth posted a video of her students using a sing-song style of memorizing the Subject and Object pronouns. After viewing it with my students, I asked them if they wanted to do skits of their own — they were super enthused so we set about learning how to record and edit using ScreenCastify, a recording system for Chrome that my district uses. We meshed them altogether into one 3 minute film instead of a bunch of 30 second films. It was fun to see them working together to come up with motions that would help convey understanding and creative dance moves that added to the fun. Click on the video to see for yourselves (by the way, after you do, you’ll probably start counting all the pronouns I’ve written in this post just like I am!):

I look forward to finishing the Parts of Speech lessons in the next couple of weeks so we can move into analyzing sentences and expanding our own written expression skills. If your grammatical skills are a bit rusty, I suggest heading over to Mary Beth’s YouTube Channel to check out more of her classroom videos and take her next class.