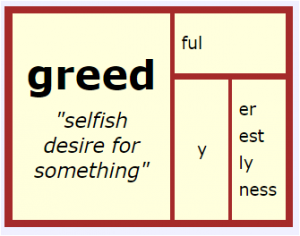 The Diamond Group (4th graders) are studying Fables at the moment.  A common theme among the fables we are reading is greed.  This theme also provided a nice transition from our author study of Patricia Polacco who often writes and speaks of bullying and the consequences of greed.  Last Friday we watched a speech she gave at a school in which she talked about greed, bullying and learning disabilities along with kindness, compassion and finding one’s own strengths.  The students listened to her set ground rules before she passed the wishing stone  around to the kids to make wishes upon. I was humbled by the understanding my students had of why she set rules that they could not wish for anything that could be bought for them or done for them….no money, toys, etc., that greed was likely to take over and they’d want more. She also said they could not wish to change anybody, because we can take action to help someone by showering each other in kindness.  The students gave exceptional responses to the discussions we held after the video, some even surprised me with their self-reflections and grasp of the message she intended to convey. (Click on the above link to view the video)

This week, as we began studying the theme of greed in fables, The Goose with the Golden Eggs, The Lion and the Hare and The Stonecutter Who was Never Satisfied (all found on ReadWorks.org), we also wrote word sums with the free base word <greed>.  Digging into a word study takes time and leads to distraction — in a good way–the best way, actually.  It leads to reviewing what the word means, what it doesn’t mean, connections to their own lives, and noticings by the students (“Oh! I see a ‘y’ suffix like we did last week…” and “Wait, what about the word …”).  We didn’t get as far with the reading of these fables as I wanted to, but I spent a glorious amount of time being impressed by the kids’ reading and reasoning skills as they came across unfamiliar words–this is another amazing distraction that warrants spending quality time praising their efforts, their noticings and wonderings– “Look Mrs. B., I can cover up the <-ly> suffix and I can see the beginning is <even> but I’m not sure if <tual> is another suffix or a base” — how can you ignore the richness of this type of wondering?  It’s impossible unless the clock runs out…which of course it did.  But alas, there’s always tomorrow!

It was on the second day, I got greedy!  The lessons we do with SWI take longer than many other things we do because we go off on many different trails.  While these trails are rich and deep and filled with discovery and meaning, I fight the battle with Father Time….I want it ALL — time to dig deep and practice reading and writing text; but 45 min goes by far too quickly.  In my greed, I planned to start the lesson with an Entrance Ticket, which is a way for the kids to show me what they remember from the prior lesson; which I thought we’d finish in 2-3 minutes then have time to finish reading the stories and move on to the comprehension questions.   The best laid plans were meant to be broken, reminding me of the flexible nature of teaching.  On this Entrance Ticket was the task to write 2 of the word sums from the day before and 1 additional word that wasn’t covered.  The kids wrote two of the few we’d done the previous day:

However, when they each came up with their own, it did not make sense. I was surprised that in the silence of this 2-3 minute task, all of the kids (group of 5) chose the same suffix or derivation of it with the same ending result — a word they thought sounded like our word, but had a completely different meaning!  The words were:

I was completely surprised and not surprised at the same time.  Surprised because, after so many lessons about meaning being central to any word study coupled with feedback from the kids during previous lessons, I felt the kids knew that whatever word they came up with had to connect to the base word of <greed>.   However, they had just demonstrated that the sounds they process in their mind independently, often do not assimilate with meaning yet which does not surprise me.  Language processing is often a weaker area for people who struggle with reading.  Words often sound a lot like other words.  Lately, because of the holiday season, they’ve been hearing ‘greetings‘ quite often.  When we discussed the meaning of that word, they knew instantly that it did not connect with the meaning of ‘greed’ and yet, they still had such quizzical looks on their faces….they were certain these two sounded just alike.  After some practice with the 2 base words and feeling where our tongue taps as we say the /t/ and /d/ sounds (eureka! — it’s in the same spot! — just a difference of air flow — try it!) the quizzical looks dissipated and heads began to nod in understanding.

I learned that I need to take a step back and sideways sometimes … provide more opportunities for the kids to independently practice writing their own word sums more often.  I think up til now, I’ve provided more guidance than I realized.  Time to gently push them out of the nest and begin to flap their own wings and make these discoveries of connecting what we hear/say to the intended meaning.  I also learned that I need to be more patient with the pace of the lessons.  If I had rushed this lesson, maybe skipped the Entrance Ticket, I may have missed a very crucial opportunity to right a misunderstanding.

Watching the students’ faces go from confusion to “ah-ha!” when they finally recognized why ‘greeding‘ was not the same as ‘greeting‘ but also that they were not alone in their misunderstanding and that paying attention to how sounds are formed in the mouth can be a clue too, was pure joy.  Joy in the fact that they felt the discovery — I led them there with questioning and wonderings but they made the discoveries.  There is joy in making mistakes when we celebrate the things we learn because of it.

I learned that I if I am greedy with my expectations in teaching with SWI, we risk losing grand opportunities to learn at a deeper level than is recognizable on the surface.  I learned that although I can’t see how we will fit everything in this school year, that if I am patient, I will be open to setting up and recognizing these moments which will be of much greater benefit to the students than rushing through to the finish line.

Hmmmm…..there is another fable I am reminded of……….The Tortoise and the Hare……I believe that fits well here!